After a move back to Greece for a career break from running Shepherd Neame pubs, it didn’t take too much to lure long-serving licensees Michael and Helen Paraskevas back to the UK.  When they heard that quintessential English pub The Griffin’s Head, Chillenden was in need of new licensees, during a visit to the UK, they simply couldn’t resist!

Helen, originally from Rochester, Kent, met Michael while she was travelling in Greece.  They got married in 1981 and then worked for 25 years in Michael’s family restaurant before they came to the UK with their three children to run the Watermans Arms in Wouldham for three years, then the Bucks Head in Sevenoaks for 10 years.

Helen said: “When we decided it was time for a break, we headed back to Greece, but my sister Carol and her husband Ralph took over the pub, so we still had a link with Shepherd Neame.  We heard that the Griffin’s Head was going to be available and when we saw the pub, we fell in love with it. It is a such a beautiful, traditional building with so much character.” 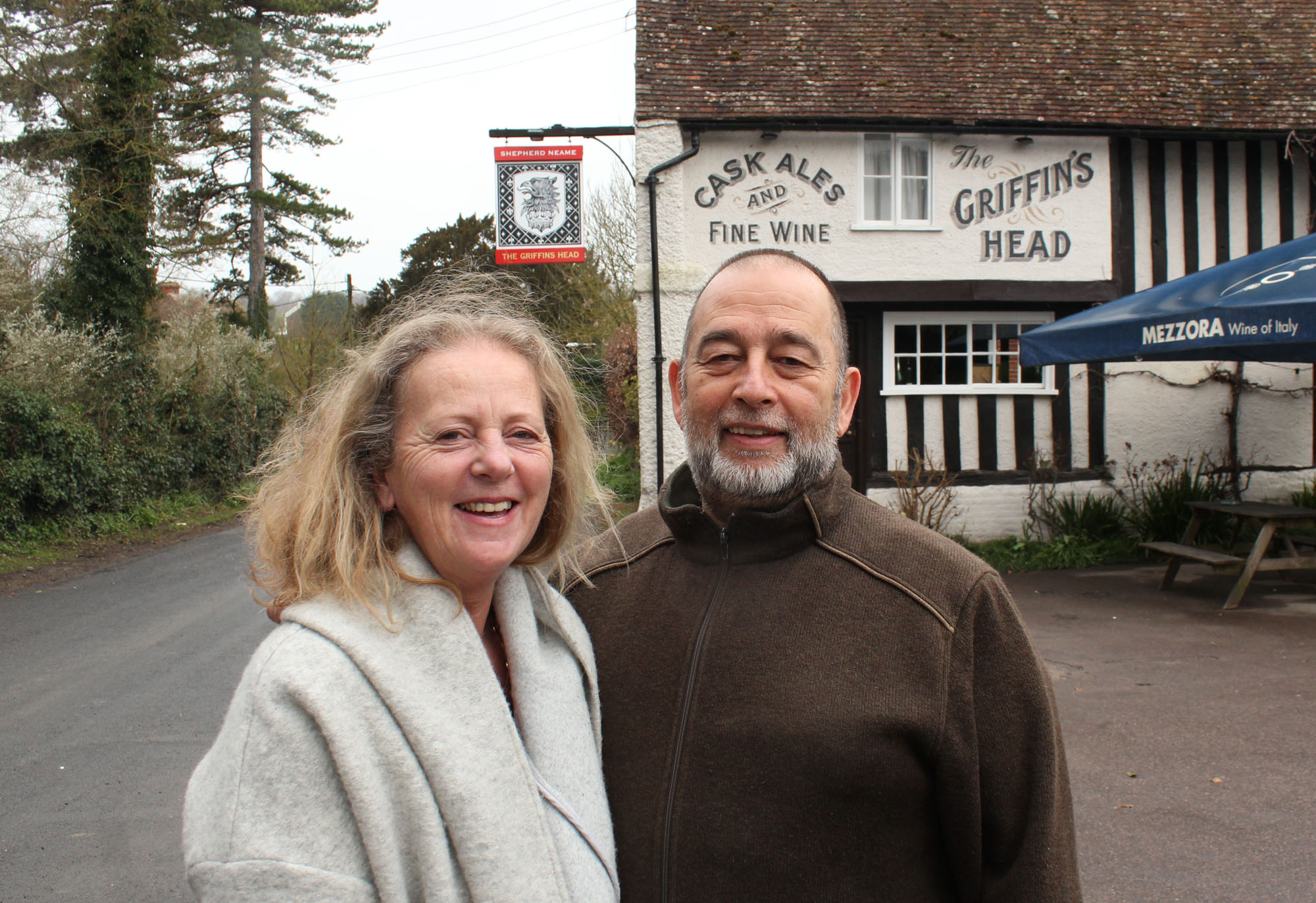 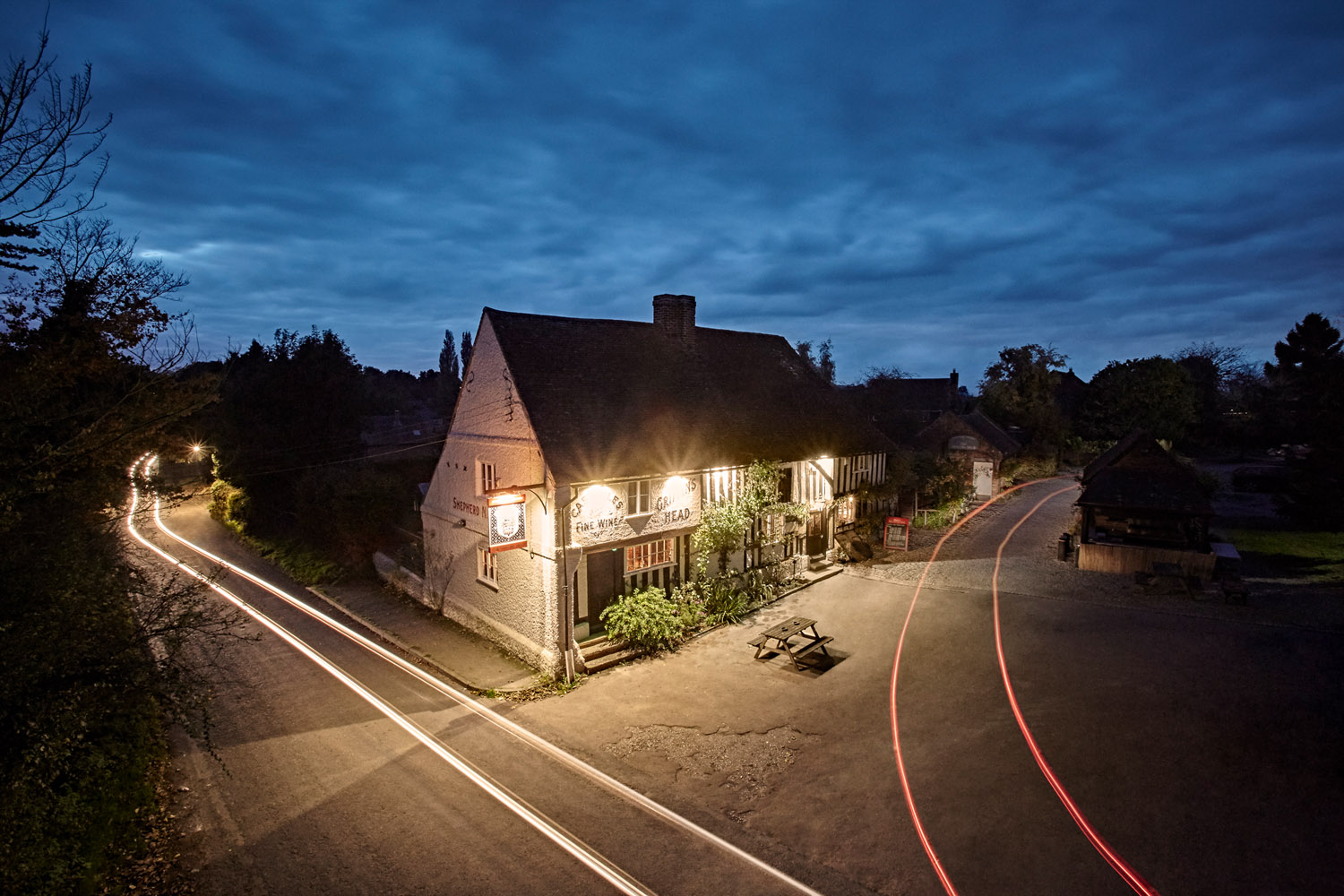 Built during the time of Edward I, the Griffin’s Head was originally a farmhouse until 1405, until 1766 when it became a fully licensed pub serving travellers on the main Canterbury to Deal road. It still boasts many original features, including oak beams, flagstones and an inglenook fireplace.

Explains Helen: “We were ready for a new challenge and as we’d loved working with Shepherd Neame over the years, it seemed too good an opportunity to miss. It’s a real privilege to be living in a 15th century building!”

The kitchen, outside barbecue area and upstairs living accommodation have been completely transformed.

Now, with their team of seven with Helen front of house and Michael heading up the kitchen, as you might expect, the pub menu has a distinctly Mediterranean flavour with plenty of fresh fish and Greek specialities such as stuffed vine leaves.

When Sharon and Gordon Thompson, licensees of Shepherd Neame’s Castle Hotel in Eynsford, saw an opportunity to expand their family business, they jumped at the chance.

Their son Charlie, 23, who had recently graduated from university, was helping out at the pub but wasn’t sure what to do in the long term. So Mum and Dad suggested he use his experience of growing up in the pub industry to become joint manager of another Shepherd Neame house, the Abbey Hotel, Battle, along with family friend Lauren to help realise their ambition of expanding the family business.

Says Sharon: “We invested £40,000 in a matched investment refurbishment with the brewery and since we re-opened in September, business is going great.

“It’s the next step on from the Castle: we’ve taken lots of ideas that work and then added some more. We have a beautiful deli bar, wine racks, fusion teas, cafetieres and stunning glassware, offering customers something for every time of the day with a very high-quality serve. We have nice artwork on the walls and super comfortable high-end armchairs. It’s a home from home so people feel at ease but at the same time it feels special.

“Our approach to the business is that you have a four walled venue and you need to squeeze as much in as possible to get everything out of it and maximise all the business opportunities.”

The food offer at the Abbey mirrors that of the Castle: it’s mid-market fresh, seasonal food which Sharon describes as “not Gastro – I hate that word – and not frozen lasagne”.  Dishes range from tasty nibbling pots inspired by tapas and meze dishes, to classics such as beer battered cod and chips or liver and bacon with their own twist, to a more substantial rack of ribs or a delicate Lemon Sole.

Explains Sharon: “Our drinks offer is a great example of how we approach the business, catering for all ages and making their experience special. We have a vast range of premium gins and mixers served in crystal glasses; we have cocktails, Prosecco and Champagne; and then of course there’s always a top quality pint of beer.” 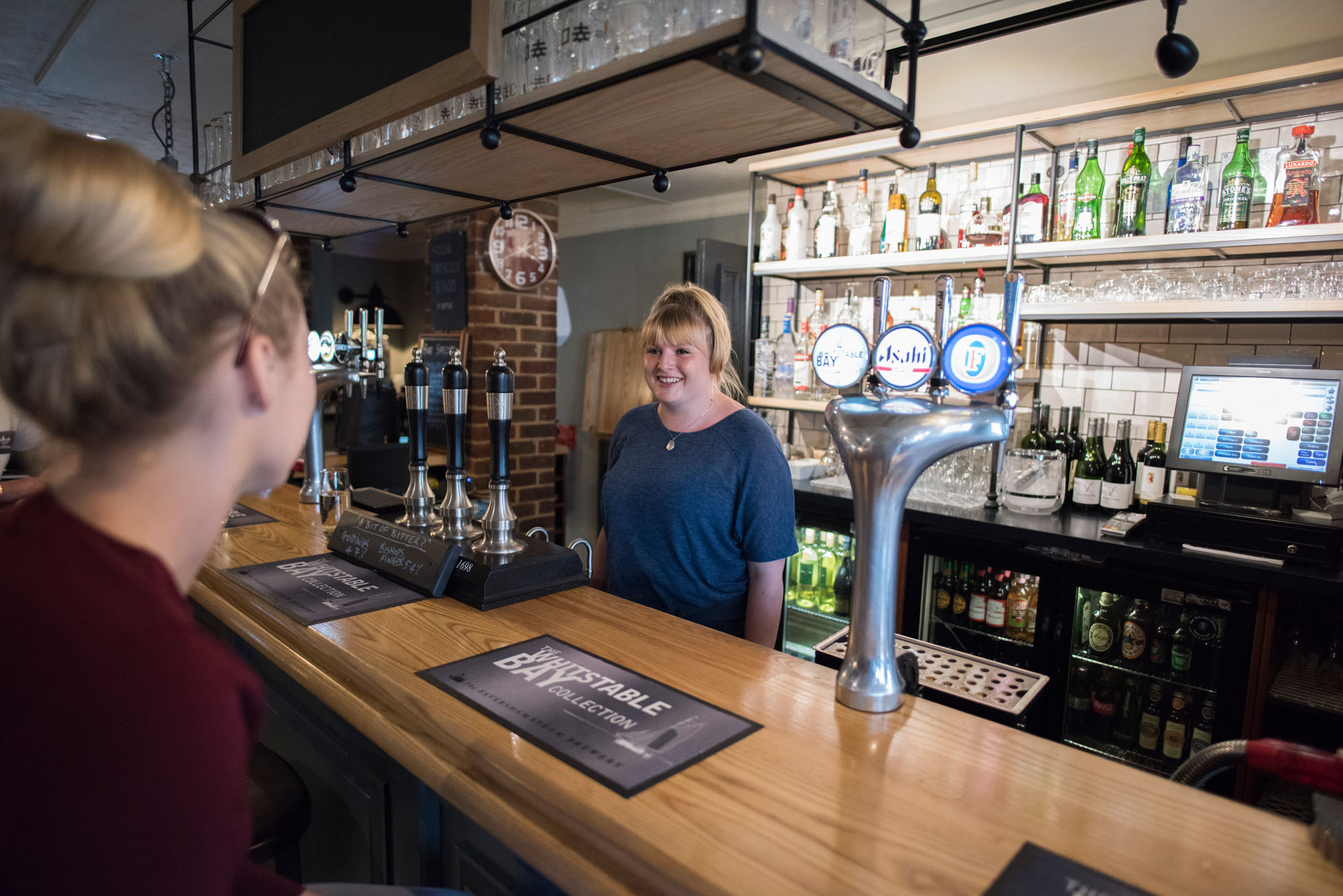 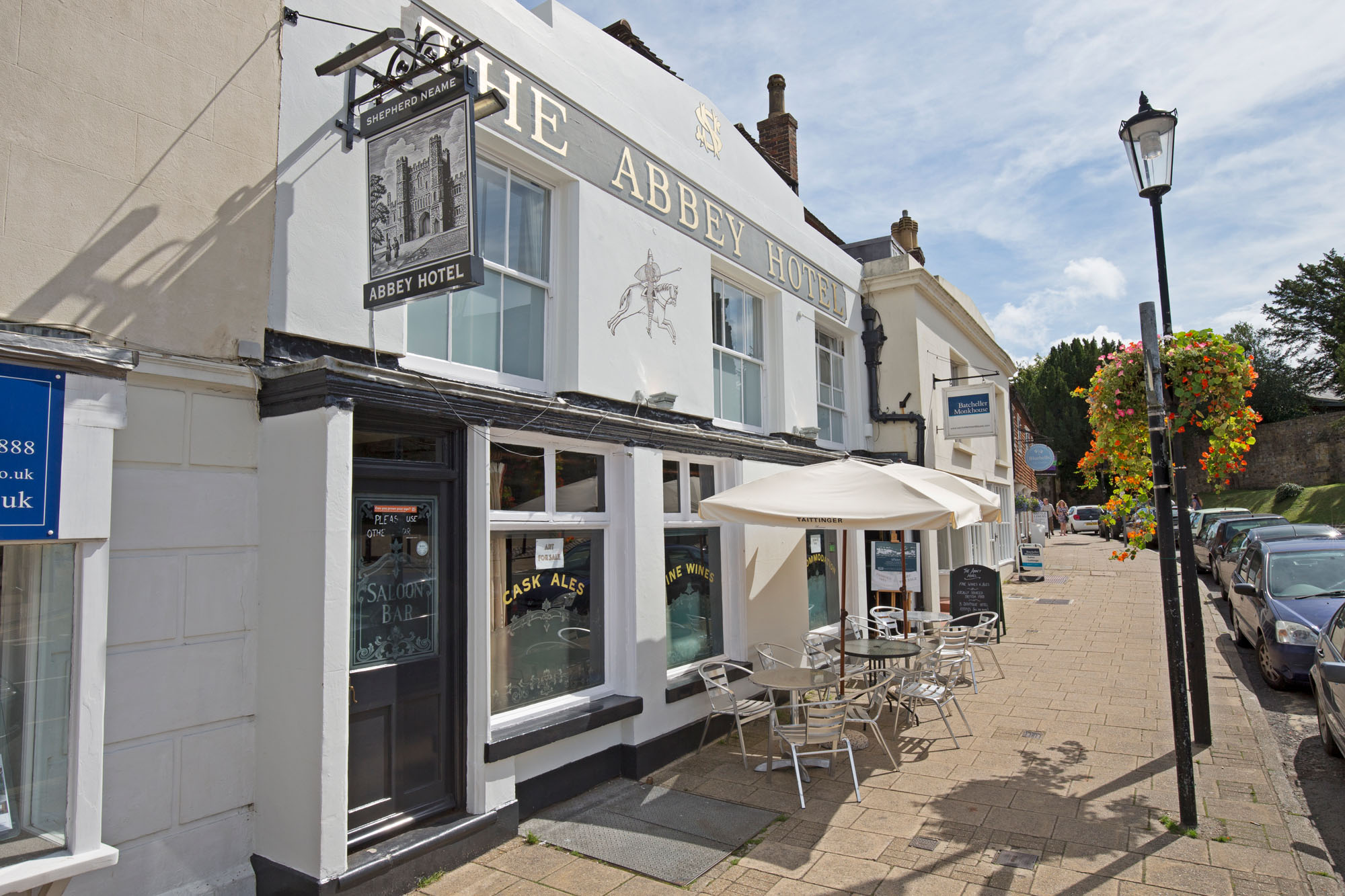 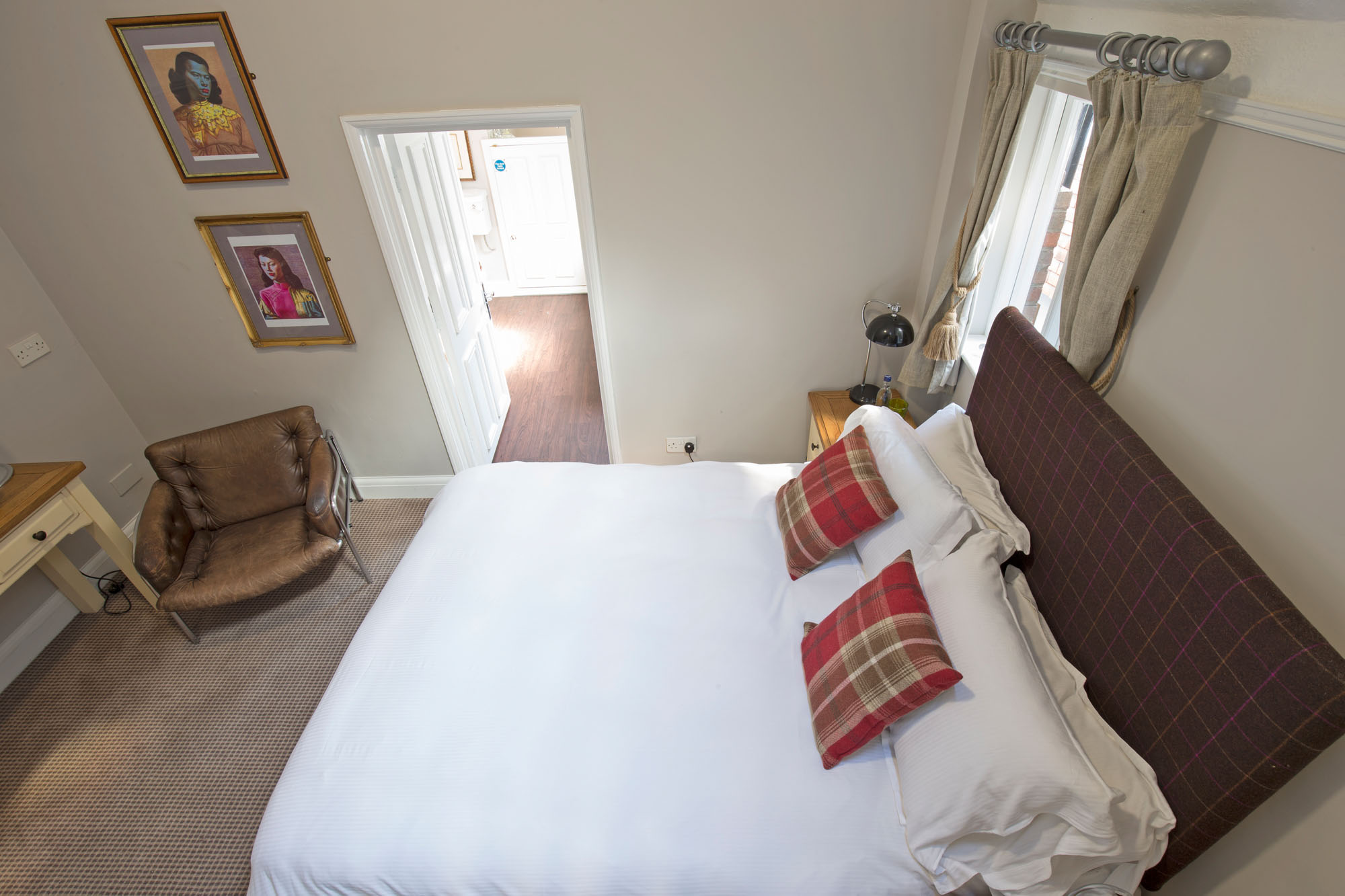 Sharon’s enthusiasm and passion is infectious but things haven’t always been so rosy: “After years of making money as successful licensees, we lost everything in the financial crisis and came back to the UK from Cape Town with four children, nowhere to live and no money.  Since we approached the brewery to take on our first Shepherd Neame pub, they’ve helped us every step of the way with matched investments to refurbish the pubs we’ve taken on.  Without their help we wouldn’t be where we are now: they are a very forward-thinking company.”

Now, with a staff of 52 split between both pubs, their hard work is paying off. The family business could be on the verge of expanding further next year when one of Sharon and Gordon’s three daughters returns from her travels in Australia.

Says Sharon: “My advice to anyone wanting to go into the pub business would be to do your research: eat out, experience the latest trends, visit all the big chains to see how they are doing it and then do it better.  Most importantly, be prepared to work hard.”

For more information on the Castle Hotel visit www.castlehotelkent.com or phone 01322 633917 and for the Abbey Hotel visit or www.abbeyhotelbattle.co.uk or phone 01424 772755.

AWARDS AND ACCOLADES FOR FOODIE PUB

If you haven’t already heard of Rob and Donna Taylor and their ‘muddy wellies and fine food’ pub, The Compasses, Crundale near Canterbury, then it won’t be long until you do.

These two chefs, who cut their teeth in some of the top hotels and restaurants in London and Australia - she’s Australian and he’s British – have fast-built a reputation for outstanding food served in a traditional 14th century pub in the middle of nowhere.  Marina Loughlin from The Guardian described it as “…genuinely excellent – it reminds me of the early days of the Sportsman in Seasalter.”

Says Donna: “It doesn’t come much better than that - what an accolade! It’s incredible really when you think that in four years we’ve come from nothing to being in the Michelin Guide.

“It’s not a pub that you would pop into on the way somewhere, which is one of the reasons we like it. We want people to want to come here for the food and enjoy the historic setting, the roaring fire and the smell of hops.”

Their multi-award winning menu uses the freshest local produce, sourcing meat just a quarter of a mile down the road, and vegetables, herbs and fruit from the pub’s garden. Donna looks after front-of-house while Rob works as head chef, and his food has received a host of accolades, including Kent Life Food and Drink Awards Winner 2015; Waitrose Good Food Guide 2015; Harden’s UK Restaurant Guide 2015.  The pub was also crowned Shepherd Neame Tenanted Pub of the Year 2016.

Donna and Rob met while they were both working at the five-star Royal Garden Hotel in Kensington and early on, they toyed with the idea of running a pub.

Says Donna: “We were figuring out what to do: stay in the UK or go to Australia?  We spent some time in the old pubs around Thanet where Rob’s family are from and I loved them but at the time, it was all scampi and lasagne and we thought pubs don’t do nice food!”

After heading back to Australia, a couple investing in a pub in Essex asked them to come back to the UK to create a fine food offer and essentially manage the business.  However, this all fell through when Donna found out she was pregnant.

Fast forward a few years and the couple, despite not having any money to invest in a pub business, were still keen to join what Donna terms “the new generation of landlords, offering something different in order to ensure that our historic pubs survive”. 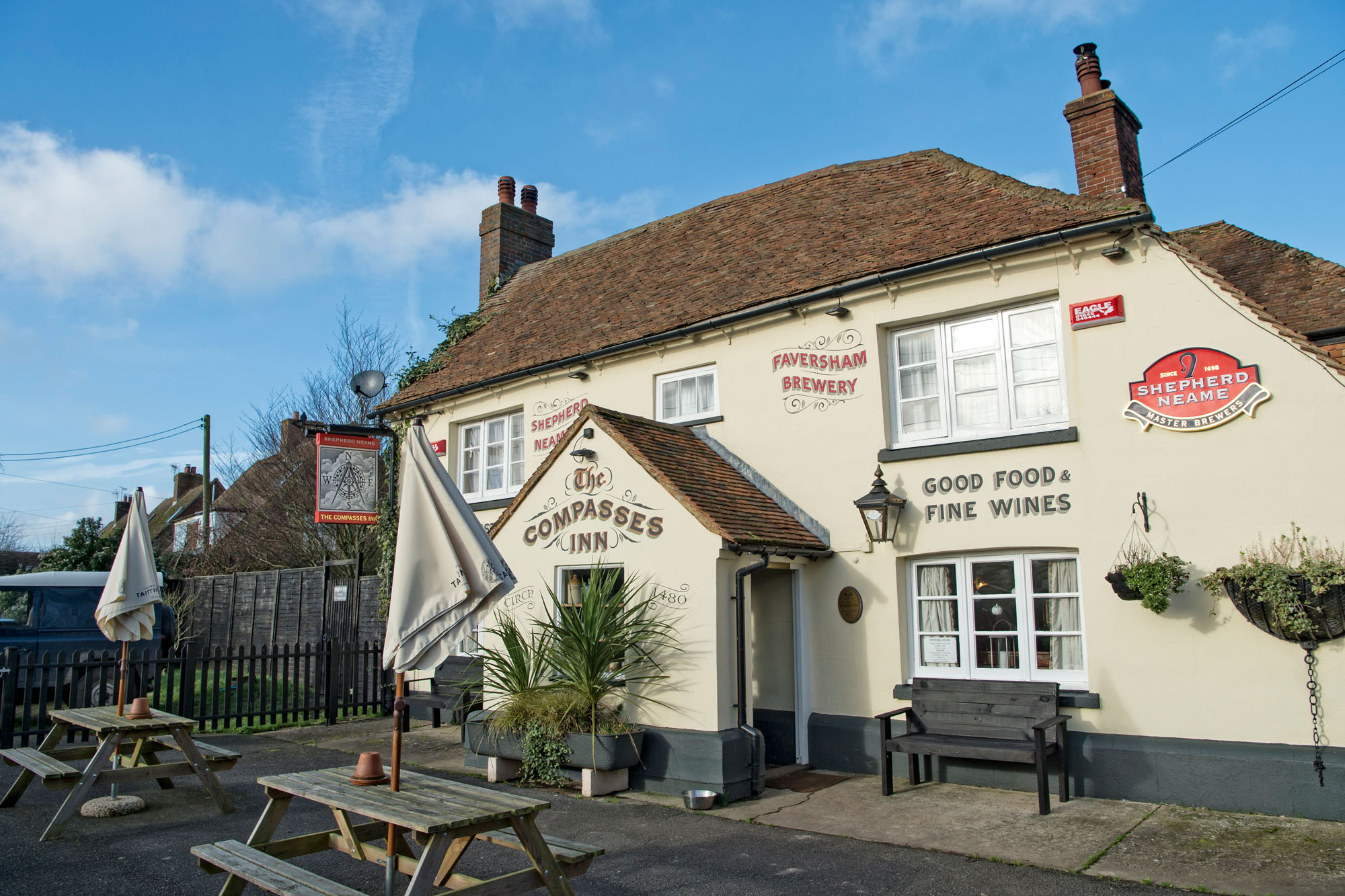 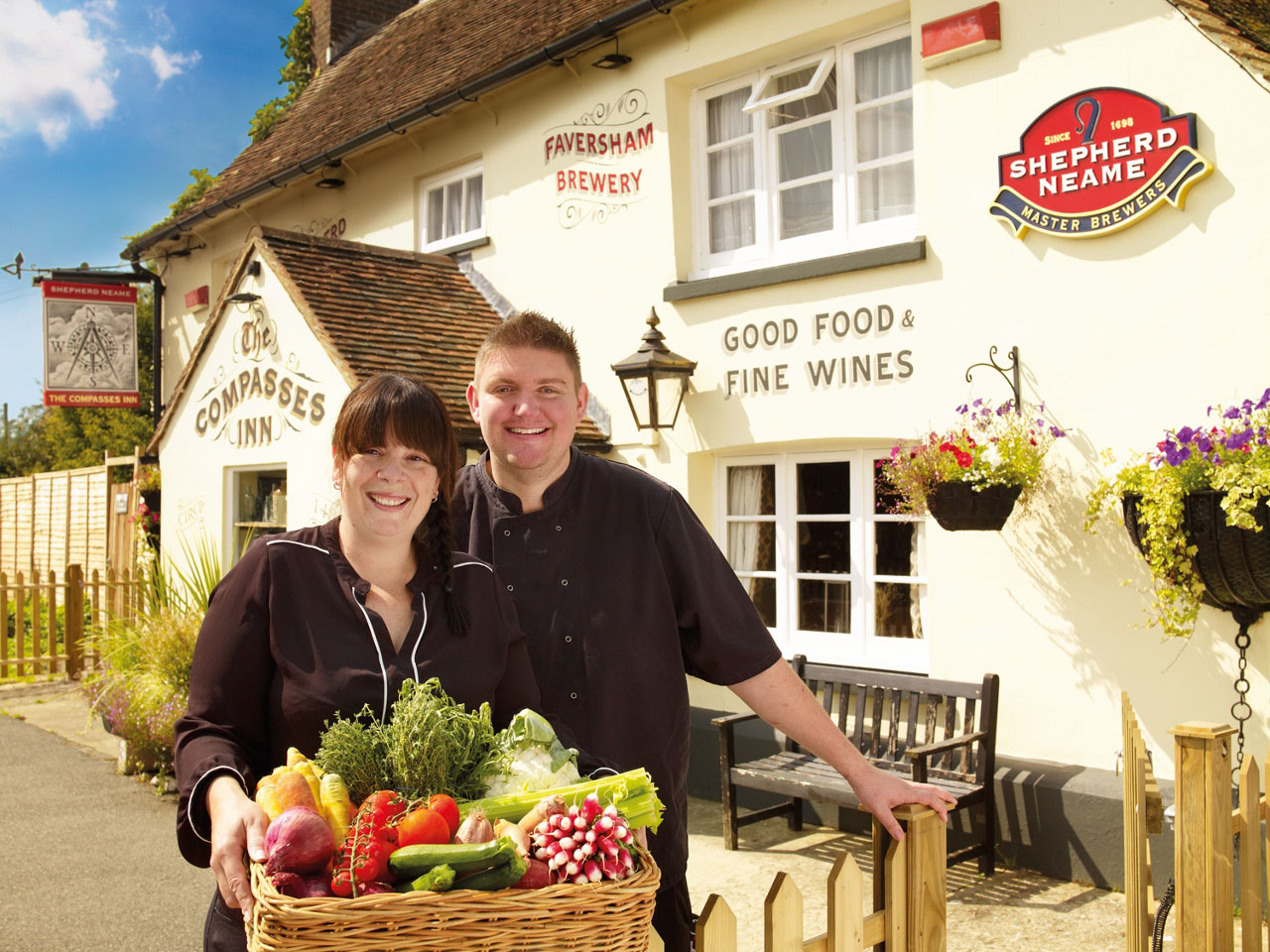 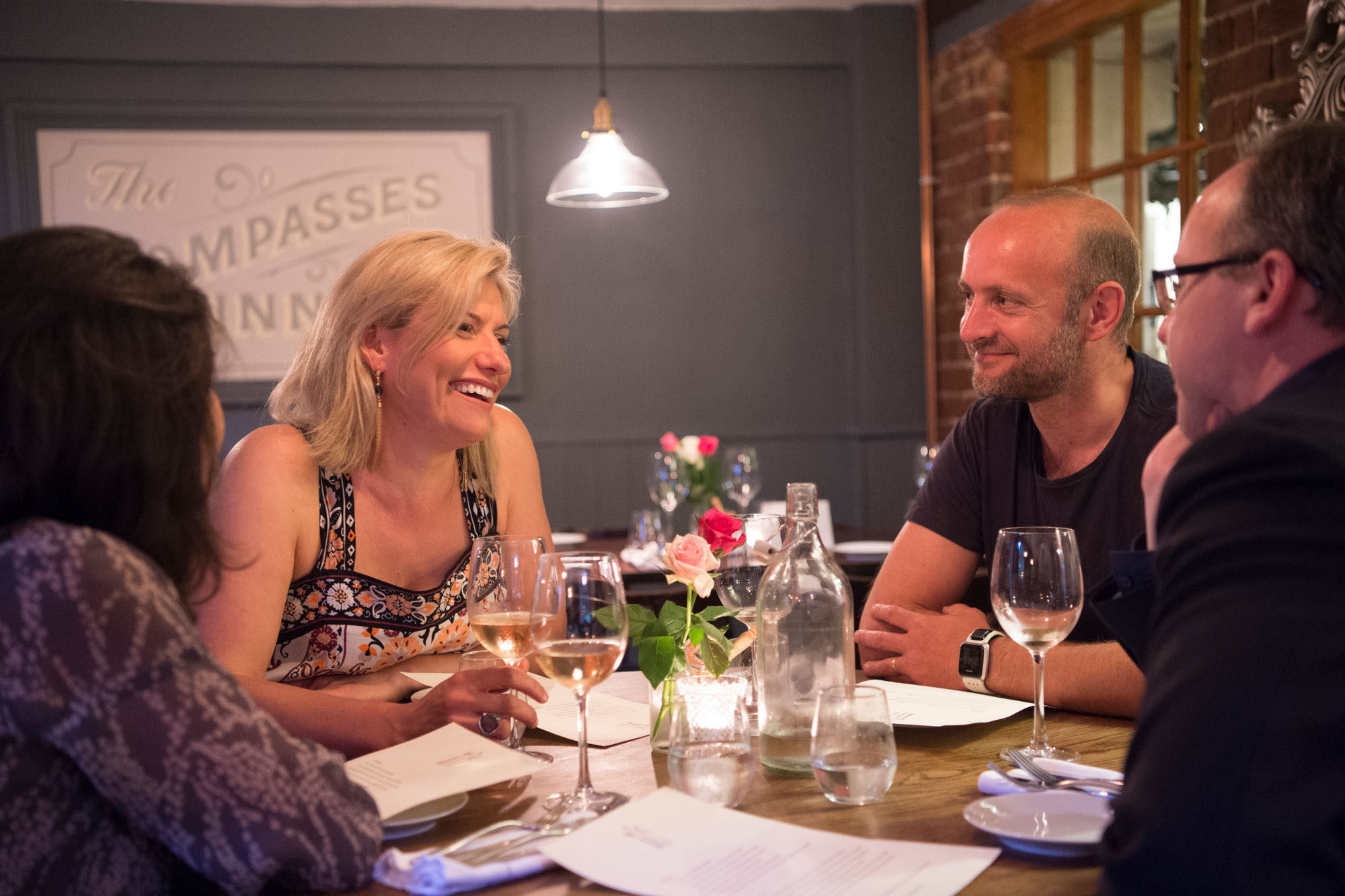 The couple have counted Phil and Stephen Harris at The Sportsman, Seasalter among their friends for several years and it was they who encouraged Donna and Rob to go to Shepherd Neame.

Says Donna: “Phil and Stephen share our passion for good food and their stripped back, laid bare approach to the environment in which they let their food do the talking is something we greatly admire.

“The brewery made us work hard to get the pub, and rightly so. Essentially we were two top chefs with no experience of running a business. But they took the risk, which I guess has paid off!”

Donna cannot speak highly enough of the support they have received from the brewery: “We’re massive advocates, I mean they’ve been around since before Australia was even discovered!  They are so supportive, they nurture you and when we win an award we always acknowledge Shepherd Neame.

“Their attention to detail is exceptional and they’ve invested in new toilets, an exterior refurbishment and when we came back from holiday we had a new car park.”

Adds Donna: “Our aim when we took on The Compasses was to offer fantastic food, in the sort of comfortable environment we would like to visit and we’ve pretty much achieved that. So the next step is to bag that Michelin Star.”