Our brewers love to receive your feedback on our beer, and you can contact them here.

However, there are a number of questions we receive fairly regularly, so our Head Brewer, Mike Unsworth has answered them below.

Which beers are gluten free?

We are in regular contact with the British Beer and Pub Association and with Campden-Bri (food and drink researchers) regarding beer and health issues.

The current view with regard to glutens in beer is as follows:

1) Internationally current test methods are not reliable and do not exclusively prove that glutens are not present in beer, so beers that make claims to be below the 20ppm level may well cause Coeliacs problems.

2) Food labelling for glutens is not consistent world wide. For instance in the UK a beer with less than 20ppm can be labelled as gluten free , but a beer in Australia has to have no detectable gluten to be considered gluten free. We label all of our beers as containing Barley as a source of gluten

3) Individuals with Coeliac disease vary greatly in their reaction to glutens. There is research evidence that small fragments of gluten are not detectable in beer but can trigger intolerance reactions in some people.

We would suggest that you should take professional medical advice and should approach beer consumption with care as there is no consistency in the claims that are made by the various producers.

Currently we cannot categorically state that any Shepherd Neame beer is gluten free.

Which beers are suitable for vegetarians & vegans?

All our keg and bottled beers are suitable for vegetarians and vegans.

Unfortunately, our cask beer is not suitable because we use something called isinglass finings (made from the swimbladders of fish) to help make the beer clear – or ‘bright’ as brewers call it. This is a popular method of ensuring clarity in beer and wine – although some brewers will use alternative fining methods.

What is the carbohydrate content of beer / Is there sugar in beer?

There is much speculation about the sugar content of foodstuffs.
Below is a blog from the BBPA which helps explain sugar in beer

"There has been considerable focus on the sugar content of food and drink in the national media of late, and in particular some misleading reports have been published, claiming to highlight the ‘hidden’ sugars within alcoholic beverages, including beer. Much of this focus appears to be on the apparent addition of sugar to beer by brewers and, in the case of one report challenged by the BBPA in February, the ridiculous suggestion that a pint of ale contains nine teaspoons or 45g of sugar!
Spurious claims aside, the reality is very different and a pint of beer will typically contain less than a teaspoon of sugar. Some of the considerable media confusion occurred in differentiating carbohydrates from sugar. The total carbohydrate content of beer will almost certainly be higher than the sugar content. The finished beer contains many sources of carbohydrates beyond sugars, such as soluble fibre, many of which have been individually associated with positive health benefits. In addition, the majority of this carbohydrate is derived from the cereals which are one of the main ingredients of beer Most beer will have very little, if any, sugar added during the brewing process, and any sugars that are added will be almost entirely converted into alcohol. The average sugar content for ale with a characteristic alcohol strength of 4%-5% ABV is around 2.5g, or half a teaspoon, per 500ml. Studies reported in the media that centre on sugar do so largely as a proxy for calories. In this way it is worth remembering that beer is relatively low in calories. A typical half a pint of bitter contains just 90 calories - that's fewer than in the same amount of orange juice, or milk.
Confusion and misinformation reported in the media do very little to aid consumer understanding of complex issues associated with nutrition and diet. They can also lead to misconceptions and in the case of beer, few know that, as well as being relatively low in calories, it also typically contains a variety of vitamins and minerals. There is no doubt that, when enjoyed in moderation by those without underlying health conditions, beer can certainly be part of a healthy lifestyle."

Some of Shepherd Neame’s beers have glucomalt (a brewing sugar) added, this has the same sugar profile as malt derived sugar and is converted into alcohol in the same way. Equally many of our beers do not have brewing sugar added. The addition may be a requirement of a beer we are brewing under licence or may be there to give more fermentable material and hence achieve a higher alcohol.

Is there fluoride in brewing water?

All of our beers are brewed using water extracted from our own artesian well, not domestically supplied water.
The water in the well will have filtered through the local chalk and sand down to a depth of 200 feet prior to us using it. There is no fluoride in our brewing water

Nutritional information on beer is not something that is routinely determined, manufacturers of alcoholic beverages are not allowed to make any nutritional claims. This analysis is now found on some supermarket own label beers and will probably become more widely available in the next couple of years. However as a guide you may find the following typical values based on analysis of one of our 4.5% ABV beers:

What are the ingredients of beer?

All of our beers are brewed using 100% natural ingredients, the finest malted English barley, hops, and the brewery's own artesian mineral water. Some of Shepherd Neame’s beers have a small percentage of glucomalt (a brewing sugar) added, this has the same sugar profile as malt derived sugar and is converted into alcohol in the same way.

Is yeast present in beer?

Do you brew organic beer?

Whitstable Bay Organic is available in 500ml bottle only as a Soil Association accredited organic ale.

Why are there foreign languages on labels?

Our beers are popular around the world and hence we export to many countries, many of which have their own labelling requirements.
In order to have a consistent appearance for the product and minimise the number of labels needed we produce a label that is compliant in many countries around the world.
This means that for example Bishops Finger from Kent can and will be exported to Australia but the beer only ever travels one way.

Where is the best before date on bottled beers? 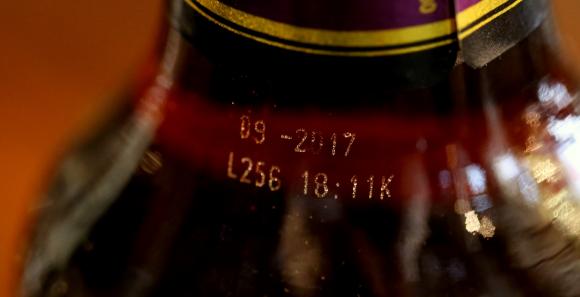