The ancient craft of thatching has brought a new lease of life to the crowning glory of a thoroughly modern Shepherd Neame pub, Manor Farm Barn at Southfleet.

Master Thatcher Glen Charter and his team completed a four-week refurbishment of the thatched roof of the pub, which is housed within an 18th century barn, earlier this month, giving it more than a decade more before it will need a full re-thatch.

The pub in New Barn Road, which became Britain’s first 21st century thatched pub in 2001, has had its roof repaired and refurbished, and a new ridge built on top.

Skilled craftsman Glen, who has been thatching for 34 years and is a member of the National Society of Master Thatchers, was joined by Thatcher Richard Seaman on the project. It is also topped off with Glen’s signature straw sculpture, a pair of doves, which can be seen sitting high on the top of the ridge by passing motorists.

Glen said: “The roof of Manor Farm Barn is the largest thatched roof that Shepherd Neame has – it is a very big roof!

“It has a 32ft slope on one side and a 25ft slope on the other. It had not been overhauled since completion in 2001, so there was a lot of refurbishment work to do, including removing the moss, and repairs to the coat work to carry out.”

“It is a great sense of achievement when you have completed something like this - particularly with this one, as it needed so much work,” he added. 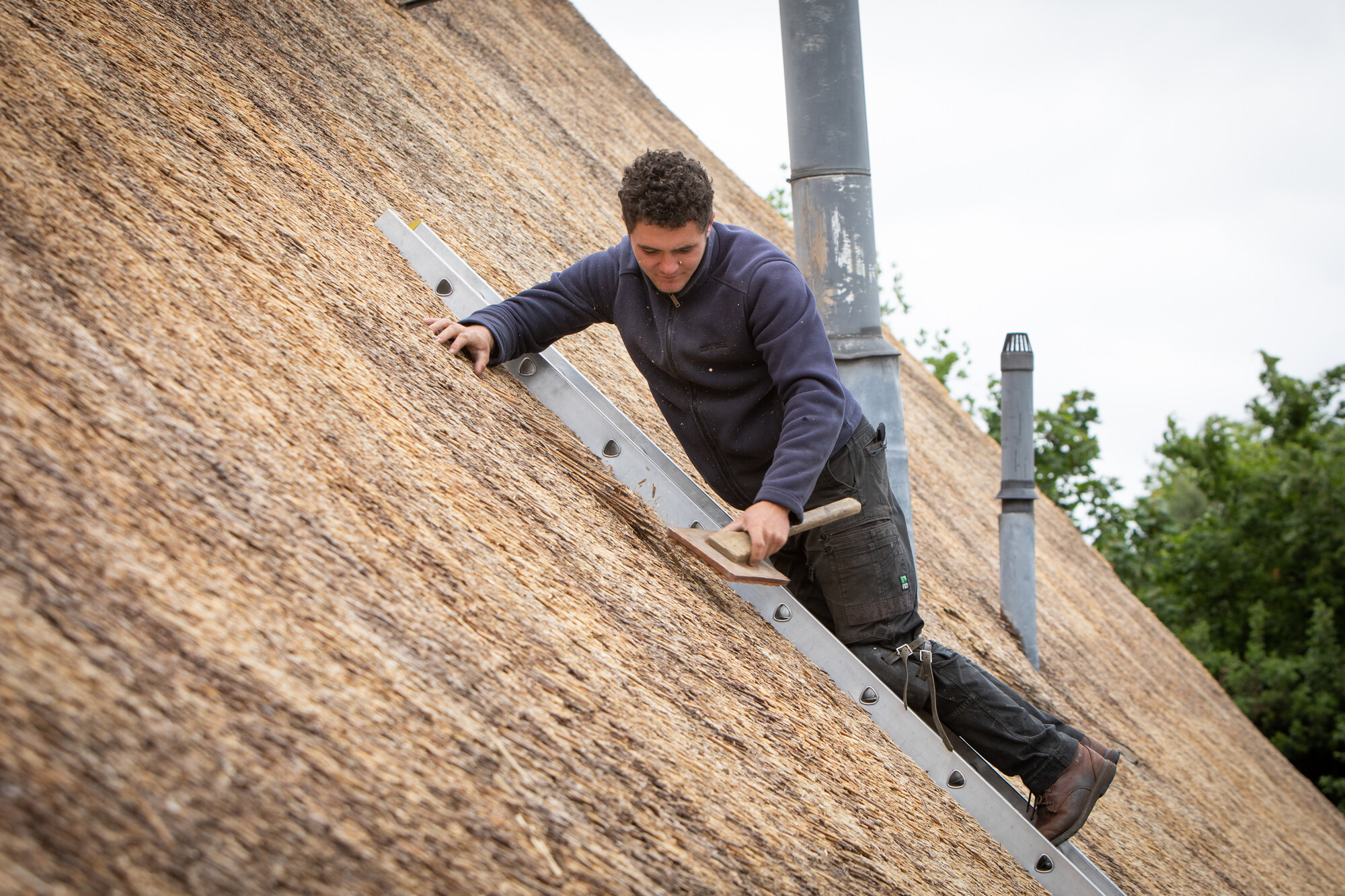 “I’m very pleased to do it, and to be bringing Richard on in the trade. It’s nice to bring it back to a good condition and give it extra years.”

Turkish Water Reed was used to repair the main thatch, with straw for the new ridge sourced locally from a farm in Smarden.

The reed provides a thoroughly waterproof cover for the historic building. “Each reed is, in effect, a tile,” says Glen.

Richard, who joined Glen as a Thatcher after moving from studying Engineering at college, said of the key skills needed: “You can’t be clumsy! You also need to have a head for heights, and you need to be able to work hard. ”

Martin Godden, Shepherd Neame’s Head of Property Services, said: “Glen has looked after our thatched roofs across the estate for many years , including a complete replacement of the Chestfield Barn roof in 2020. He certainly deserves the title of Master Thatcher!”

Glen re-trained as a Thatcher following the Great Storm 34 years ago at the age of 25.

His next project is back working on the very first roof he ever helped thatch in Charing Heath, which is near his home in Eastling. He added: “Very occasionally it can feel too high even for me! But it’s great to be conserving such historic buildings, and generally it is nice to be outside. A nice autumn day is the best weather for thatching - not too hot and not too cold.”

You can find the Manor Farm Barn at New Barn Road, Southfleet, DA13 9PU. Inside the beamed building, visitors can enjoy delicious restaurant dishes, award-winning ales and lagers from Britain’s oldest brewer, Shepherd Neame, while outside, there is a spacious patio garden.

To book and find out more call 01474 834967, or visit www.manorfarmbarnsouthfleet.co.uk