Shepherd Neame pubs across Kent, London and the South East will be getting into the Jubilee spirit, commemorating the Queen’s Platinum Jubilee during the upcoming four-day bank holiday weekend.

From live music to traditional pub games, vintage film screenings and even egg and spoon races, there’s a pub near you putting on some jubilant celebrations.

The independent family brewer and pub company – which has a long association with the Royal family, holding Royal Warrants for its Grants Morella Cherry Brandy and flagship Spitfire Amber Ale – will also be serving a limited edition Celebration Ale across the weekend at selected sites. Crafted by its Master Brewers using the best of British barley, the bespoke English ale (4.8% ABV) has light caramel notes and a deep golden hue.

Pubs will be decked out in themed bunting, with themed flags and cardboard crowns available to celebrate the special occasion. Events across the area include:

The Alma, Painters Forstal, near Faversham
The pub will have three days of Jubilee-related fun, from live music to nostalgic footage and traditional family fun including an egg and spoon race.
On Thursday, June 2 there will be a Beacon Lighting and performance of Music Through The Ages, as well as a screening of personal local footage of previous Jubilee celebrations. The following night live music will come from Marvellous Mo and the Ferrets in the garden at 8pm and woodfired pizzas will be available from 6pm to 8.30pm.
On Sunday, June 5 the Big Jubilee Lunch will be held alongside the pub, with traditional games, a crown competition and fancy dress.

Belle Vue Tavern, Ramsgate
The festivities will kick off on Friday, June 3, with a cocktail party, with music from MUSICA in the garden (weather permitting), while on Saturday, June 4 there will be a traditional street party with recorded period music.
The celebrations will be rounded off on Sunday, June 5 with music in the afternoon.

Chequers On the Green, High Halsted
Festivities in the village begin on Thursday, June 2 with the lighting of the beacon by a pupil from nearby High Halsted Primary School, and live music at the pub from vintage duo The Dulcettes.
On Saturday, June 4, there will be a village fair on the Green from noon to 5pm including stalls, a tug of war and Maypole dancing, and the pub will have a bar serving drinks, followed by live music from Groove 101. The weekend will be rounded off with fireworks at 10.30pm.

The Dewdrop, Hawthorne Avenue, Rainham
The Dewdrop will be holding a two-day Jubilee Party, starting on Friday, June 3 when Deal-based band CUDA will kick off celebrations at 8.30pm.
The following day on Saturday, June 4, there will be a bouncy castle for children with hotdogs and pizza available, a raffle and live solo singer Charlie in the garden from 4pm,
rounded off with a disco from 8pm. Visitors are encouraged to don red, white and blue for the festivities.
The pub has also produced its very own Jubilee shot for the occasion, comprising Grenadine, Curacao Blue and Curacao Triple Sec.

The George, Newnham, Sittingbourne
The Jubilee weekend’s activities will centre on the pub’s garden, beginning with an invitation-only Afternoon Tea on Thursday, June 2, including projection of Buckingham Palace parades and music in the garden. On Saturday, June 4, the pub is holding a Great British Picnic with Pimms and entertainment from the Rose Gold String Trio from noon, followed by the village choir performing in the garden from 3pm. The weekend will culminate in a Big Sunday Lunch with food being served from noon to 4pm. Booking is advised. 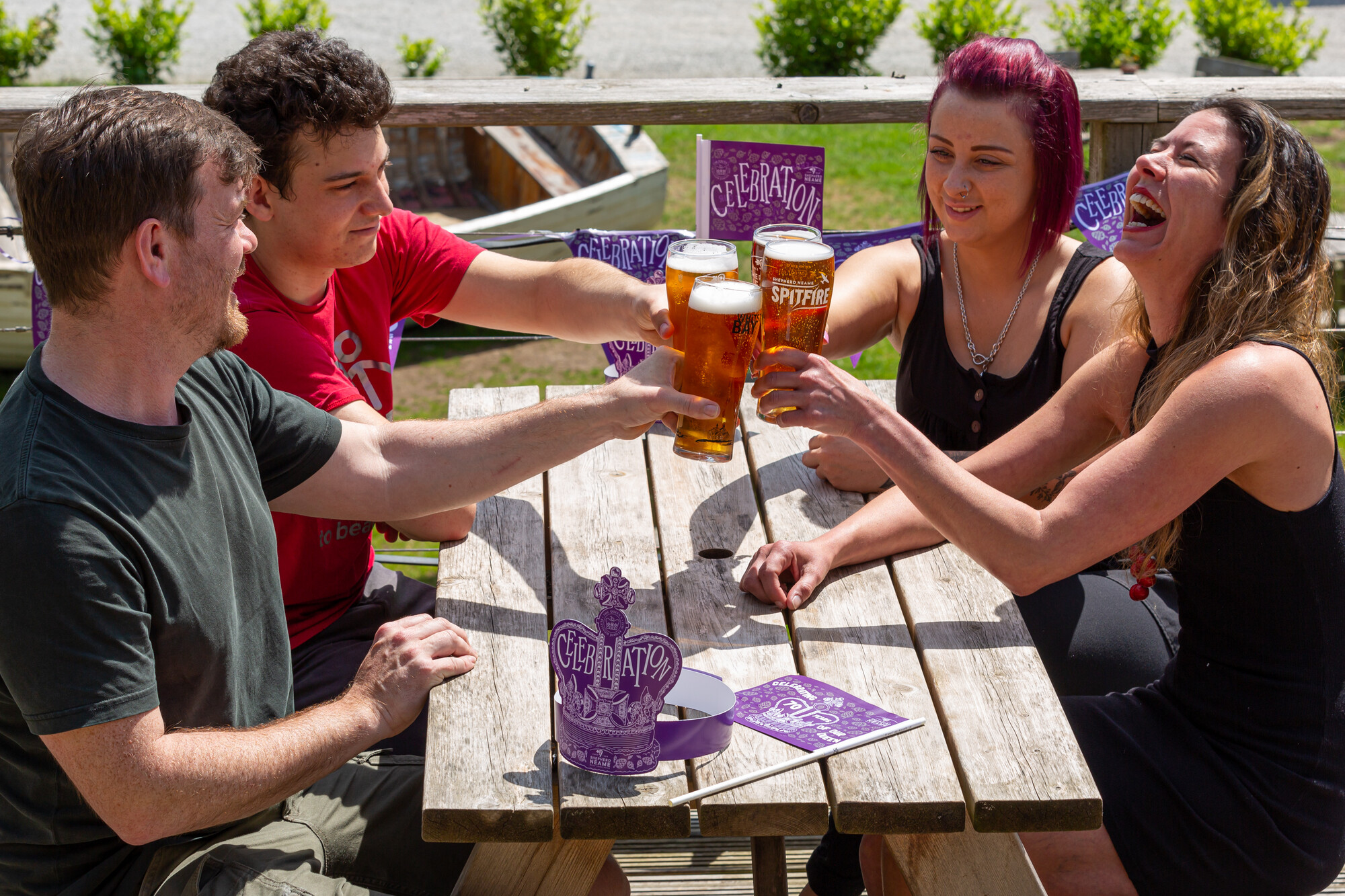 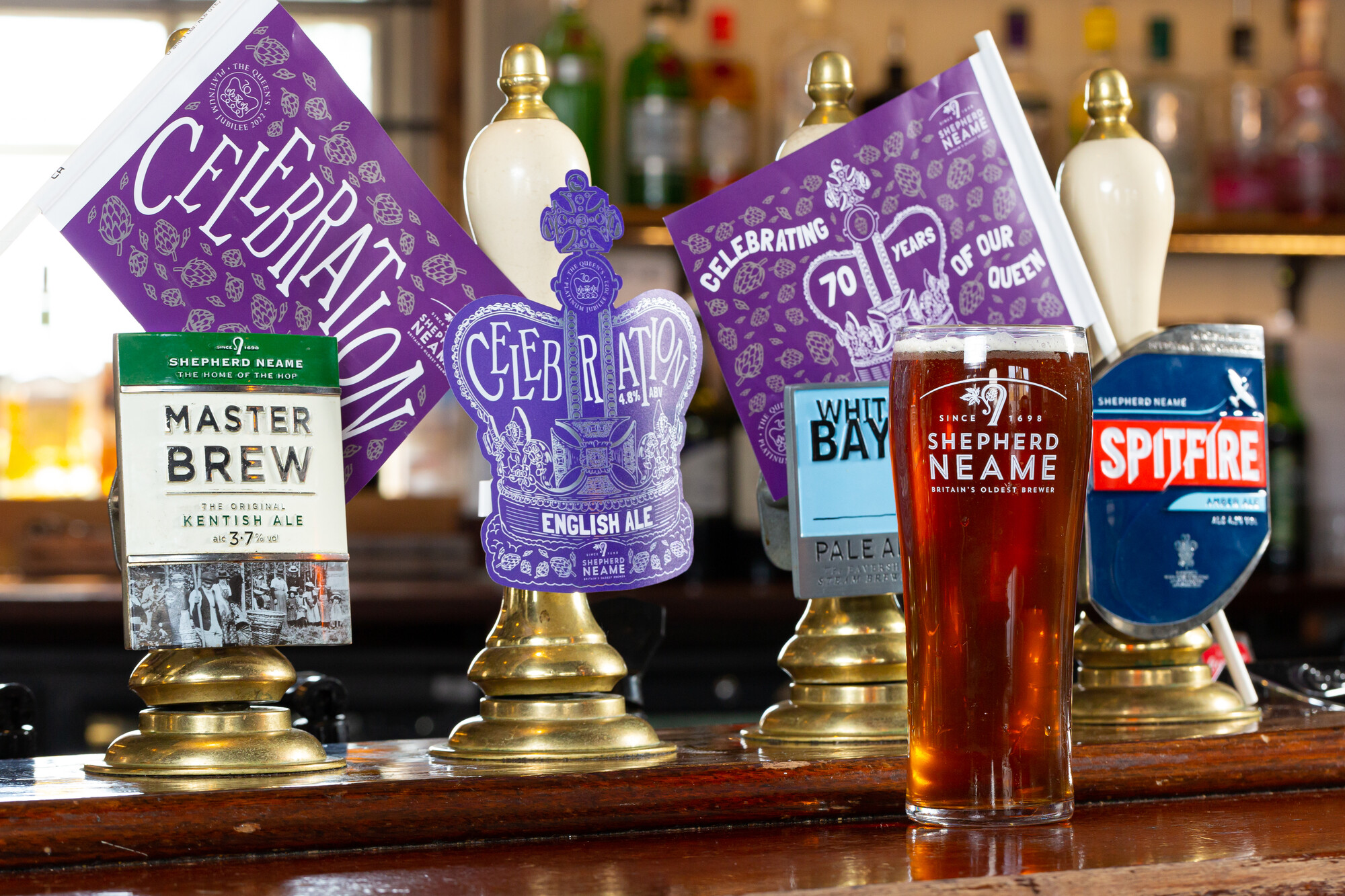 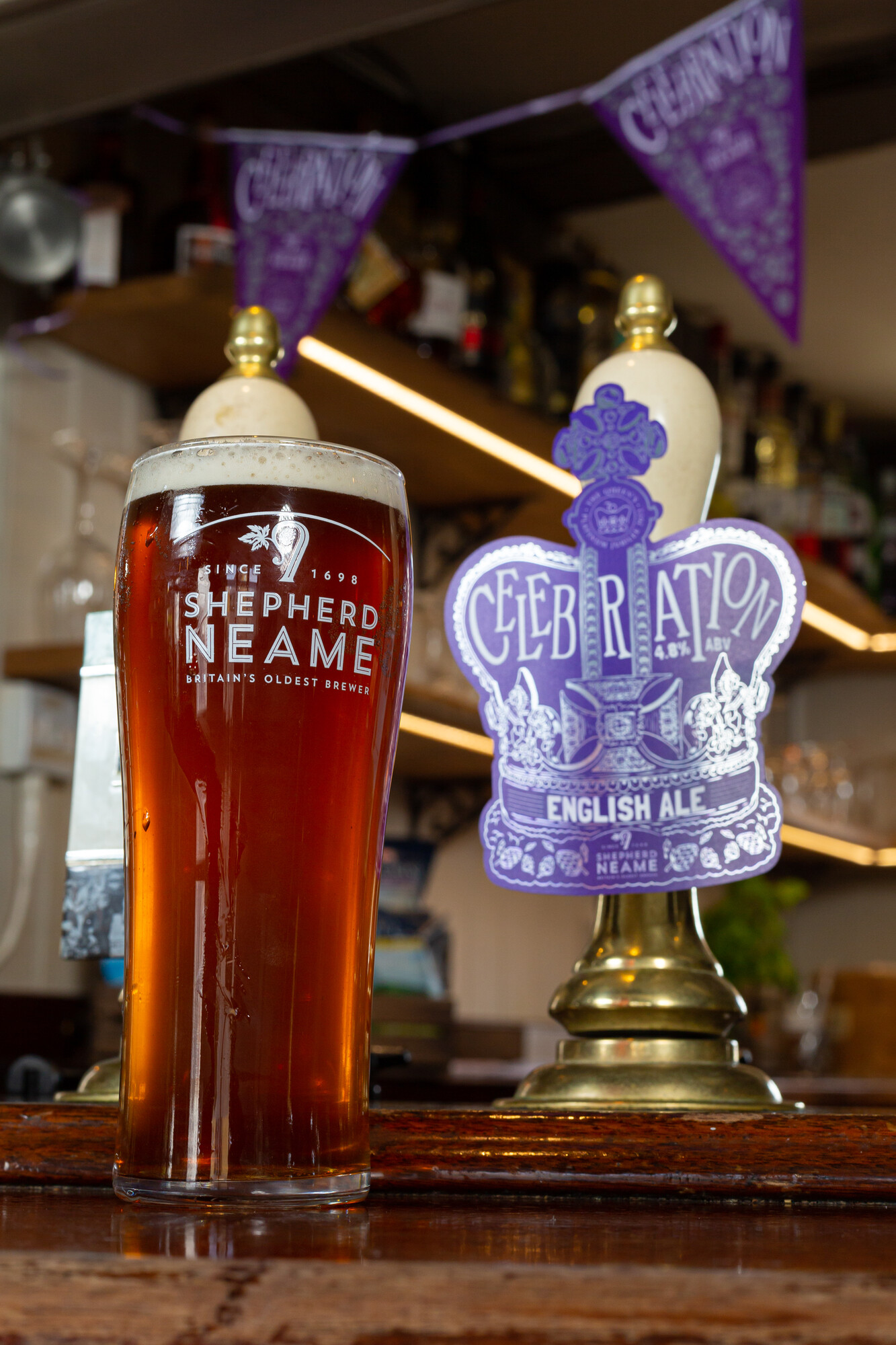 Horse & Groom, Charlotte Court, Ramsgate
The pub is going all out with a four-day Jubilee Olympics, running throughout the long bank holiday weekend.
Licensee Jamie Berry has organised a contest involving the following sports: darts; pool petanque; cornhole (an American bean bag tossing game), Irish ring toss and Dutch shuffle board. The pub – a stone’s throw from Ramsgate harbour – will stage the games during the day indoors and also in its outside courtyard and adjacent petanque piste, and have live music in the evenings. There will also be a hog roast on the final day.

Horse & Groom, Wilmington
The pub in Leyton Cross Road will be opening for breakfast on Thursday, June 2 through to Saturday, June 4 from 9am. It will be staging a royal-themed quiz night from 7pm on the Thursday, and have live music on both Friday and Saturday, with Jayne Snow playing from 6pm on Friday and Mark Bradley DJ from 8pm on Saturday.

Manor Farm Barn, Southfleet
On Friday, June 3 there will be a children’s Jubilee Party between 3pm and 6pm for under 12s, with a colouring competition; fancy dress competition; street party buffet and face painting. It costs £7 including food to attend. There will also be a party for the grown-ups with a DJ from 7pm. Book your tickets by calling 01474 834967.

Pier Five, Chatham Maritime
There will be acoustic music on the patio from local artist Jayne Snow from 2pm on Friday, June 3, followed by an evening with DJ Tommy A from 8pm.
On Saturday, June 4, local musician Jordan Ravenhill will be providing acoustic vibes on the patio from 2pm, with soul, funk and disco music coming from 8pm with Soulful Saturday by Soul Train Sounds.

Royal Naval Reserve, Whitstable
Cream teas will be available to tuck into at the pub in Whitstable High Street on all four days of the bank holiday weekend, and a traditional roast on the Sunday.

The Three Mariners, Oare, near Faversham
The rural pub will have a showing of The Greatest Showman from Roaming Cinema on Thursday, June 2 from 9.15pm, and a live DJ from 4pm on Friday, June 3. There will also be live music from Capitano and the Whistleblowers on Saturday, June 4.

The White Lion, Selling
The whole village will be involved in the Jubilee activities which kick off on Friday, June 3 when there will be a village cricket match from 1pm at Cadman’s Meadow, Selling, with live music at the pub in The Street, Selling.
The following day there will be a country garden gig, with porch swing blues, and pre-booked afternoon teas, while on Sunday, June 5, there will be a Sunday roast “fit for a Queen”.

To see all the events happening across Shepherd Neame’s pub estate, and to find one near you, go to: www.shepherdneame.co.uk/platinum-jubilee-celebrations